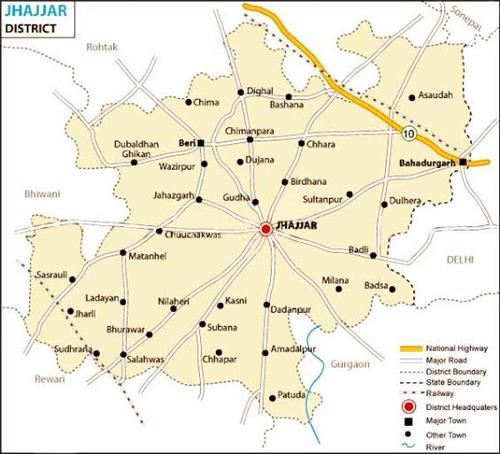 Jhajjar experiences semiarid, continental, sub tropical and monsoon type climate. During summer months of April, May and June temperature can rise to as high as 44°C. The climate is usually very hot and dry during this time. During the summer months very often sandy dust cyclone can be seen occurring. People are advised to stay indoors as it might affect the skin of the body and get also get into eyes too.Rainy season is from the month of July to September brings some relief to the people residing there from the extreme hot climate of the summer months . The region experiences heavy rain during this time. The region is under the grip of chilling cold between the months of October till March. The coldest months however are December and January when the temperature can dip to as low as 2°C. Heavy woolen cloths are needed to keep oneself warm from the chilling cold waves.

The soil texture in Jhajjar differs from clay to sandy. The composition is heterogeneous and calcium carbonate layers can be found frequently. The textures in Sahibi river basin which can be seen in different parts of Jhajjar are sandy loam and mostly brown and yellowish in color. Organic carbon, Phosphorous and Nitrogen are low whereas Potash can be found in medium to high quantity. The district is said to be part of digenetic alluvial plain. The sediment here consist sand, silt, kankar, gravel and much more.

Undulating dunes at some places and alluvial plain on others represent the topography of Jhajjar district. Plain elevation on an average is about 222 meters above the sea level. A gentle slope from North to South is there. The movement of ground water in the south western part and North western part is S.W. to N.E. and S.E. to N.W respectively. As per survey conducted in the year 2012, fresh quality ground water form 36%, Marginal to marginal saline comprise 50% and 34.5% represent saliva zone. The minimum depth of water table is 1.37 whereas the maximum depth is 30 meters below the ground level.

As per census 2011 Jhajjar town had a total population of 48447 with male female ratio in of 861 female per 1000 male. The density of the population in this district is 522 people per sq kilometer. People can be seen speaking the language Haryanvi mostly here. However, a large number of populations residing in this area are also Hindi speaking. Mostly inhabited by those who belong to the Ahirs, Jat and various other . The total literacy rate in the district is 80.80%. The literacy rate of female is less compared to the male population. As per the last report that is available the literacy rate off male is 89.40% and that of female is 71%.

Comments / Discussion Board - Geography of Jhajjar